THE BATTLE OF THE BUGS 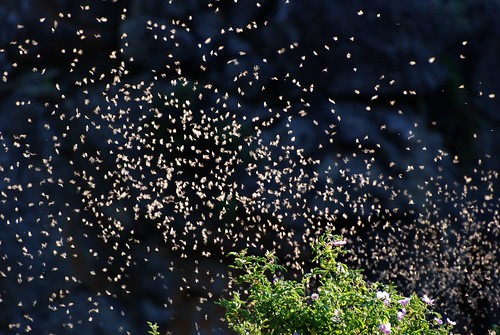 Since the 1990’s, Federal and state game officials have wanted to restore the Paiute cutthroat trout to a nine-mile stretch of the Silver King Creek in the Sierra Nevada wilderness, according to The Wall Street Journal. But for almost 10 years now, the bugs that inhabit this area, and their lawyers, have been pissed to hear about this plan. Well at least the people who hired the lawyers are. Enter Nancy Erman, a retired insect researcher and bug ally. She and here other bug cohorts say the plan to use the toxin rotenone to exterminate all the non-native fish from the area will endanger the lives of the insects in the area.

But, Bill Somer, a biologist with the California Department of Fish and Game says there are no rare species of bugs in the area and the population of insects will not be harmed.

“State officials say it would hurt individual insects, but not the population at large.”

“Part of the project is to expand the population of fish so they can fish for them,” said Nancy Erman.

Hey Nancy, whats the problem with that?

From the sounds of quotes like these, it makes me think the bug advocates aren’t looking at the science that biologists are using, but rather fighting an ideological war. How do these people think repairing the natural habitat by re-introducing native fish is a bad thing? And oh by the way, the fisheries program of the U.S. Fish and Wildlife Service, in association with state agencies and other conservation organizations, contributes $3.6 billion to the nation’s economy and supports 68,000 jobs across the country, according to a new report issued by the agency.

Maybe Robert Behnke, a retired Colorado State University professor and expert on North American trout was right when he spoke about the bug advocates with the WSJ.